As an avid foodie, I realized I must spend a minimum of one week scouting Thailand’s capital. The astounding variety of spices and flavors that make up Thai cuisine is such that I had to put together a brief Bangkok foodie guide—including 10 dishes a first-time Thailand visitor cannot miss. 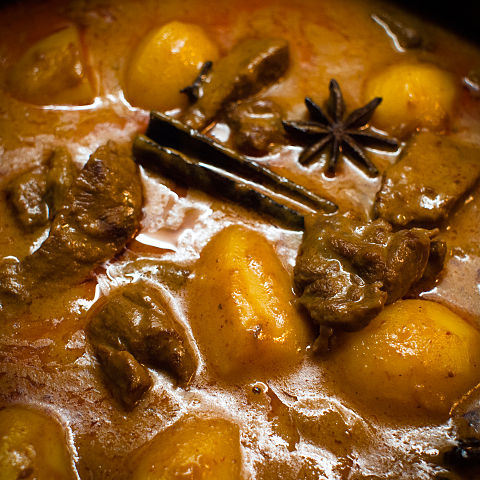 May Kaidee, near Khao San Road

I’ll explore beyond the typical red, green, and yellow curries on a spot nearby Khao San Road and some of Bangkok’s cheapest hotels. I’ll start with a non-spicy peanut kind, massaman gaen. Interestingly, it is the Thai interpretation of a Persian dish. As such, it contains some ingredients not typically found in Thai curries (i.e. cardamom, star anise, cumin, nutmeg) mixed with other local flavors (galangal, lemongrass, coriander seeds, coconut milk).

Thick and creamy, sweet-and-sour, full of rice noodles and prawns—what IS that and where can I get it?! Goong is a mouth-watering variation of better-known tom yum. Common ingredients include fish sauce, lemongrass, galangal, and kaffir lime leaves.

A popular breakfast Thai food, but offered 24/7 by several food carts throughout Bangkok. As travel writer Mark Wiens puts it, khao neow moo ping is to Thais what the sausage biscuit is to Americans. The grilled pork skewers are brushed with coconut milk before being cooked, resulting in perfectly moist, caramelized pieces.

Another must-try Thai pork dish reminds me of jamon Serrano. Process begins with pieces of pork hanged to salt and dry in the sun. The last step sets it apart from its Spanish cousin though, as pieces are deep-fried after drying. The result? Crunchy pieces on the outside, yet soft on the inside. Sweet, yet salty. I WANT.

As the dish was historically sold by vendors from boats, it was coined “boat noodles.” Nowadays though, Bangkok has an entire alley of stalls serving this pig-blood noodle soup, right by Victory Monument.

How could I leave Bangkok without trying the quintessential Thai dish? What’s fascinating is that not only is it a twist on a Vietnamese dish, but also that it is commonly misspelled by Westerners. Yes, it is PHAT Thai not PAD Thai! 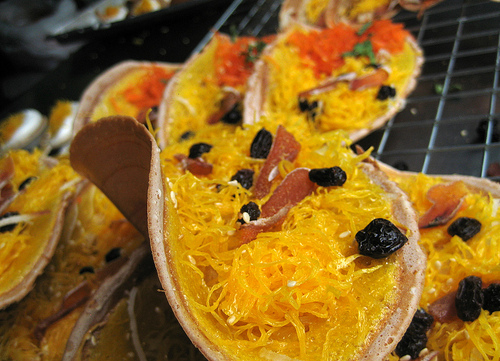